Since my last post I’ve been hibernating; hiding away through the darkest, coldest, wettest months of the year.  Pretty much ignoring the rest of the world, if the truth is told.  Not very good for the social life or the soul I know, but solitude was what was needed.  Now the sun, squirrels, and daffodils are back out I feel it’s time to get on with the year.

First on the agenda for 2016 is to pull my head out of the sand and deal with the pressing issue at hand: Shiny new medication.  To take or not to take, that is the question. 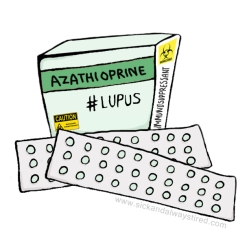 Back in October, a lovely little drug called Azathioprine was offered up for grabs.  Obviously, I agreed to give it ago (it seemed the polite thing to do).  I duly picked up my first stash, brought them home and flung them into the kitchen cupboard.

Four months later and there they still lurk, tucked away behind the first aid kit, some leftover One Direction party cups and enough (unopened) alcohol to fell a perfectly healthy liver.  Alcohol, it has to be said, I’m clearly never going to get around to finishing off if I start taking these pills.

Apparently it takes 3 months for Azathioprine to kick in and start making a difference.  So had I started taking the stuff straight away I could have felt like a whole new woman by now, or at the very least, half of a whole new woman.  But like with most medicinal items, they only get to work when they’re inside your system, not sat when they’re sat in the box.

So why haven’t I got on with it? Good question.

During these past few hibernating months I’ve done an ‘ostrich’.  I buried my head firmly in the soft furnishing and pretended the tablets weren’t there.  Not a very sensible, grown up thing to do, I know.   I’ve honestly had every good intention of popping the first pill out, and on the days and weeks when the pain got way out of control, I regularly convinced myself I’d start tomorrow.  Then I’d sleep on it, bottle it and change my mind.

The reason for this is quite simple: fear. Fear of taking such a ‘serious’ drug; fear of the short-term nausea, fear of the long-term side effects, fear of an even more useless immune system, fear of catching every passing bug, fear of shingles, fear of my liver failing.  And let’s not forget the fear of going back to my rheumatologist without having done what I’ve been told.

So there it is. You name it, I’ve feared it.  Looks a bit ridiculous when written down I know, but deciding whether to ingest horrible chemicals into your body as part of an ongoing daily routine is a hard call to make.  Especially when you alone can make that call.

Worrying about it has stopped me sleeping properly.  It has niggled away at the back of every thought.  It has made me analyse and over think, and then analyse some more.  And so the ostrich has remained, hoping that while it’s head remains firmly buried, the whole blinking problem will just go away.  Eventually I bit the bullet…

©www.sickandalwaystired.com 2016. Unauthorised use and/or duplication of this material (either written, drawn or photographic) without express and written permission from this blog’s author and/or owner is strictly prohibited. Excerpts and links may be used, provided that full and clear credit is given to www.sickandalwaystired.com with appropriate and specific direction to the original content.
Loading Comments...
%d bloggers like this: