Recently something I never thought possible happened: I stumbled upon the very best GP in the world.  Who knew such a doctor even existed?  I’d certainly given up all hope of hunting down such a rare and mystical beast.  Up until this point, I’d have probably given better odds to coming down one morning and finding a unicorn eating breakfast at my kitchen table.

It was a friendly, blood-taking nurse who originally pointed me in his direction.  I’d been having a moan about the less than impressive medical care (namely the great Azathioprine fiasco) I’d experienced recently, saying I felt completely let down.

“I know just the doctor for you,” this nurse told me.  “You’ll like this one, I promise.  He really cares and he’ll definitely fight your corner; he’s like a pit bull.” 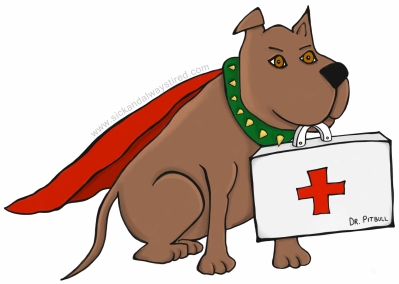 It all sounded too good to be true, I thought, but worth I punt, so I made an appointment to see him. A month later (yes, it can sometimes take that long to get an appointment) I rocked up to the surgery.

Well, blow me down with a feather if that nurse wasn’t right.

He didn’t try to rush me out of my seat or make me feel like an inconvenient hypochondriac.  He asked questions; he listened; he genuinely cared. And then, just when I thought he couldn’t have got any better, he said something that I’ve often thought but would have never dared say out loud, and certainly not to a doctor.

“Lupus is a really terrible thing to have,” he agreed.  “If it were cancer, then everyone would know you were sick; they’d make allowances and care a little more.  But I image when it’s a disease like this that no one can see, it must be very frustrating to have it ignored or not taken seriously.”

Well, didn’t Dr. Pitbull hit that one square on the head.  It definitely goes down as the most empathetic thing a doctor has ever uttered in my presence.  And then it got better still.

“You don’t have to settle for inadequate treatment, you know,” he continued. “You do have other options“.  This was news to me.  “Would you like me to refer you to the Lupus Unit at Guy’s Hospital in London? ” he asked.

“Can you even do that? ” I said, “No other doctor has ever mentioned the place, let alone offered to send me there.”

This all happened a month or so ago, and, if I’m honest, I’d filed our conversation to the back of my mind, along with all the other pipe dreams that are unlikely to ever happen.  You know the ones:  full health recovery, Euro lottery win, shifting the muffin top – that sort of thing.

And then, out of the blue, an appointment alert popped up on my phone.  Dear god, he’s only gone and done it.  On 10th November I’m getting my foot through the door of the largest Lupus unit in Europe – a place filled with doctors who treat nothing but Lupus every single day.

As if that wasn’t enough of a reason to worship at the feet of my new, wonder GP, in the months since I transferred over to him, he’s also proved to be everything the nurse prophesied and more.  As promised, he emails me the minute my bloods come in to tell me the results and check I’m OK.  He then replies within minutes of my reply, regardless of whether it’s his day off or rather too late at night.

Yesterday, (a Saturday, no less) he took doctor care to a whole new level.  When replying to his email, I said I’d felt terrible all week and couldn’t sleep.  Straight away he came back and asked if I’d like to see him next week.  That would be great, I replied, but I’ll never get an appointment with you.

Low and behold, a few minutes later, another appointment alert for this Thursday popped up on my phone: he’d only gone and sorted it out himself.

Give the man an early sainthood.  He’s single-handedly proved that some doctors are worth their weight in diamonds.  And that, with the right people in place, there’s still hope for our NHS yet!

©www.sickandalwaystired.com 2016. Unauthorised use and/or duplication of this material (either written, drawn or photographic) without express and written permission from this blog’s author and/or owner is strictly prohibited. Excerpts and links may be used, provided that full and clear credit is given to www.sickandalwaystired.com with appropriate and specific direction to the original content.
Loading Comments...
%d bloggers like this: